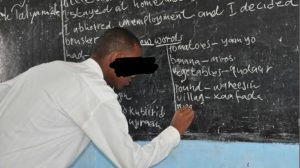 A Biology teacher has been reportedly raped by five secondary school girls in Ogun State.
The suspected girls who were between the ages of 16 and 18 walked into the man’s one-room apartment in Ayetoro-Itele community in Ogun State where the teacher was said to be recovering from an undisclosed ailment.
According to witness, the students came on mufti probably to hide their school identity. It was after the students had left the premises that a next-door neighbour noticed what had been done to the victim and decided to involve the police.
Narrating the ordeal, the neighbour recounts to the police:
“I heard voices from inside his room, although faint, because our rooms are far apart.
“I thought he was merely having some conversation; I heard the moans too but who would think something like that would have happened.
“I found him naked few minutes after the girls left as I wanted to check on his health and so I called the attention of the nearest police.”
The suspected students had notebooks and text books as their luggage during the visit.
The victim had probably thought they came on a solidarity visit since he had not resumed teaching since resumption due to his health state.
According to reports,  the man has been rushed to a nearby hospital for immediate treatment as police investigation is ongoing to fish out the perpetrators.

OF PRINCE HARRY & HIS MOTHER PRINCESS DIANA: The Quest For Freedom.

TODDLER SAVED FROM KIDNAPPERS IN BENUE

The Benue State Security Council has restricted the operations of commercial motorcycles, also known as Okada in the state.

Henceforth, commercial motorcycle operators would only be allowed to operate from 6am to 8pm everyday until further notice.

The security council took the decision at its emergency held on Wednesday, August 3rd, 2022.

Briefing newsmen after the meeting, Governor Ortom stated however that the earlier outright ban on the use of motorcycles in the Sankera geopolitical zone comprising Katsina-Ala, Logo and Ukum still subsists.

He said the decision followed the recent security alarm raised by the Nasarawa State government and what is happening in Abuja, the Federal Capital Territory, FCT, and other parts of the country.

The Governor emphasized that the decision to restrict the activities of commercial motorcycles was aimed at nipping in the bud the resurgence of criminal elements suspected to be moving into the state.

The Governor stated that security agencies in the state have been mandated to enforce the new regulations, saying stiff penalties such as arrest and prosecution awaits anyone found flouting the order.

The security council also resolved that all heavy-duty vehicles coming into the state, with covered tarpaulins would be searched at designated checkpoints along routes in and out of the state with the contents thoroughly checked before being allowed to pass.

He also disclosed that the 500 personnel of the Benue State Community Volunteer Guards, which will be formally launched on Thursday, August 4th, 2022 to complement conventional security agencies in the state have been trained and kitted with an additional five hundred expected to begin training next week.

The Governor who said the Community Volunteer Guards would work with the traditional rulers and other security agencies in fighting crime expressed optimism that being members of the communities, it would be easier for them to fish out criminals.

Governor Ortom noted that the Security Council also approved a committee headed by the SSG, Professor Tony Ijohor to work towards regulating the activities of miners, which he said have been causing environmental hazards.

Other members of the committee include the Commissioner for Lands and Solid Minerals, Hon. Bernard Unenge, Attorney General and Commissioner for Justice, Barrister Micheal Gusah and Adviser on Mining, Andrew Kputu as well as the chairmen and second class chiefs of Gboko, Kwande, Ogbadibo and Logo as members.

n a statement on Saturday, the Police Public Relations Officer of Yobe command, ASP Dungus Abdulkarim, said the suspects have inflicted serious injuries on the victim and her son, Ahmed Umar, aged 17 years after tying them up with satelite cable wire.
Continue Reading
Advertisement