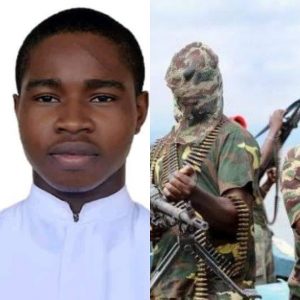 The remaining of the four abducted seminarian in Kaduna State, Brother Nnadi Michael, has been found dead on Saturday.

In a statement by the registrar of the Catholic Good Shepherd Major Seminary, Rev. Fr. Dr. Joel Usman, he expressed sadness to inform all friends and well wishers that the remaining abducted Seminarian has been found dead.

The Police Public Relation Officer (PPRO) of the State, DSP Yakubu Sabo confirmed the invasion and abduction of the four seminarians, saying that the gun men came in military camouflaged uniform and shot sporadically during the operation that lasted half an hour.

But three weeks later, three of the four seminarians were released.

Rev Fr Usman therefore thanked everyone for their prayerful support ans urged them to keep praying for Nigeria in Great Distress. ”Please let us remain faithful in the Risen Lord. May the soul of our Brother Nnadi Michael and the souls of all the faithful departed rest in peace with the Lord. Amen.” He said.

x
Related Topics:
Up Next

What a Taliban takeover in Afghanistan means for Christians

As a mark of appreciation to God for his 45th birthday on earth, Pastor Okeson Oche Onu of The Redeemed Christian Church of God, Lagos launches a new book, 45 Plans & Promises of God For You and How To Obtain Them. The book is unveiled today February 28,2021 being his birthday.

The book, considering the current situation of things on earth, reminds people, especially Christians of God’s Plans and Promises for them in order to stir and keep their faith in the Creator no matter what. It contains 45 key promises of God in the areas of your finance, health, family, spiritual attacks, etc and tells you how to make those promises yours.

You can get a soft copy of the book via: www.idhmedia.com/45plansandpromisesofgod at a token of N1,000. You can also support the author with your financial gift of any amount as he plans to roll out more inspirational books via direct transfer to: Onu Oche Okeson Gtbank 0229138949 and you will get a soft copy of the book through WhatsApp or email or a hard copy to be sent to you via courier wherever you are. Call +234-08082800039 or send WhatsApp chat to +234-08054447772

Pastor Leke Adeboye, son of the General Overseer of The Redeemed Christian Church of God, Pastor Enoch Adejare Adeboye has been brought under attack over his post on his Facebook page congratulating the young comedienne, “Emmanuella” on her new feat to build a house for her “mum,” and lashing out on adults who are still living in their parent’s houses.

The post: “While others were watching YouTube and laughing. My sister here built this house for her mom. And some are still living with Thier parents at age 35 and above. Ask God for wisdom, use your data wisely.”

Facebook users who feel Leke’s post undermine the daily struggles of the ordinary man therefore took to his Facebook handle to attack him. Below are some of their comments and replied: