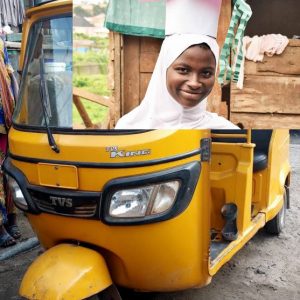 But beyond the urbanisation rhetoric is sprawling, gnawing poverty and misery left unaddressed: millions of people across Lagos whose survival depend on these sources of livelihood now have their basic existence threatened. And this is in addition to the neck-breaking inconvenience to millions of commuters who crisscross smaller road networks across the state every single second of every single day and utilize these modes of transport.

One of the millions of people directly impacted by the fall-out of this monstrous policy is our own Miss Aisha Saleh, the Glistening Genius we discovered in one of our Lagos communities. Fifteen year-old Aisha, academic genius, polyglot and child’s rights campaigner, whose refusal of an international passport by Immigration officers at the Ikoyi, Lagos passport office to attend an international children’s conference in Geneva last November as the guest of the United Nations and representative of our country, made some news.


Aisha’s dad, Saleh Mohammed is a keke Marwa driver. That’s the only thing he does for a living and from which he fends for Aisha and her brother Mohammed (their mum being dead since about a decade ago). Their dad has refused to remarry, dedicating his life to caring for the duo who stay with their grandmother in Monkey Village. Besides the educational scholarship from CEE-HOPE, the weight of feeding and every other thing rests on the fifty-something year-old. You can then imagine the impact on these kids and for millions of others like them across Lagos who are barely surviving a fragile economy- multifaceted impact.
Dear, so that’s how Lagos ‘nourishes’ its young, especially those sired by their perennially criminalized urban poor adults.
Clearly, government entities across the world make conscious efforts by their policies and body languages to project their poor-friendliness outlook and overall inclusiveness. But Nigeria, and especially Lagos State prides itself by how it terrorizes and pushes its most vulnerable into extinction. Check it up; it’s the biggest news that emanates from Lagos every single year: ban on this, ban on that and targeting the struggling poor, or shooting to death of slum dwellers in routine illegal and crude raids in the name of forced evictions. Count: Maroko. Makoko. Badia East. Otodo-Gbame etc. and just recently, Tarkwa Bay. All inhabited by millions of kids, school age kids, chased into homelessness, instability and damp directionlessness. And yet we are the country with the highest number of out of school kids. Common on, where is the sense in that?
Nothing wrong with aspiring to be a big city, but then, you have to have the big city reality: infrastructure, standards of living, employment rate and other indexes. And even then, in achieving that status, does it have to be overnight, and at what cost? How about consulting the potential victims of such sledge hammer policy for alternative livelihood engagements? What about bringing to life a non-existent welfare system?
And if you cannot improve the lot of your impoverished population, must you necessarily habitually crush and push them into further misery, actually, extinction? Does it actually make any sense that the country designated the ‘Poverty Capital of the World’ also has the worst anti-poor policies?
And what about child-friendliness? What about preserving the interrupted development of its vulnerable young population?
But then that’s what happens when the worst among us are thrusted the jagged reins of power.
No creative thinking. No empathy. No care for perceptions. No thoughts for sustainable development. Emptiness. Savagery.
That’s the tragic story of Nigeria.
A BIG SHAME ON YOU, LAGOS!
Abah, a journalist and child’s rights activist, is the founder of CEE-HOPE, a child’s right and development NGO
Related Topics:
Up Next