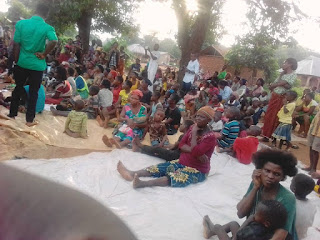 Hundreds of people from Wanihen community of Iyala Local Government Area of Cross River State have found refuge in Benue after a communal clash broke out between Wanihen and Wanikade communities. The displaced, mostly women and children from Ukele speaking area have found solace in Oju Local Government of Benue State.
In their usual hospitable disposition, the Benue people have opened their homes, churches and market square to accommodate the Crossrivarian.
In the same spirit, the Governor of Benue State, Governor Samuel Ortom, at the news of the influx of the victims, commissioned the Executive Secretary of State Emergency Management Agency Mr. Boniface Ortese to assess the situation and act accordingly. 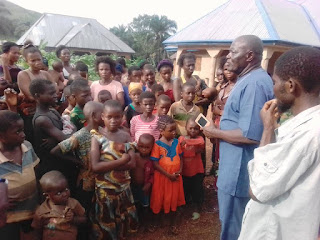 Addressing the displaced persons compassionately at the various centres after the assessment, Mr Ortese promised to take back the feedback to the Governor for immediate approval for intervention and commended the communities for amplifying hospitality of the Benue people. The Executive Chairman of Oju Local Government Hon. Austin Okeche who also visited the victims said the Local Government has so far provided food to the displaced persons and would also provide shelter to them pending the return of normalcy to their areas. Some of displaced Benjamin Lukpala and Maria Ebiaga expressed deep appreciation to people and Government of Benue State for responding quicker than their own state to their plight.
Compiled by IDH Media
Credit: Ater Mark
Related Topics:
Up Next

The presidential candidate of the Labour Party in the 2023 general election, Peter Obi, has paid the Anambra State Governor, Chukwuma Soludo, a courtesy visit at the Governor’s Lodge, Amawbia.

Soludo and Obi met behind closed-doors after which Obi lauded Soludo for the “great job he is doing in Anambra State.” This is contained in a statement posted to the Facebook Page of Soludo TV on Friday. The statement, which is titled, ‘Soludo receives Peter Obi on a courtesy visit’, read: “Governor Chukwuma Charles Soludo, CFR, received earlier today, Mr Peter Obi, former Governor of Anambra State and Presidential candidate of the Labour Party at the Governor’s Lodge, Amawbia.

“Both leaders had a mutual discussion behind closed doors. Afterwards, Mr Peter Obi commended Governor Soludo highly for the great job he is doing in Anambra State. Governor Soludo, on the other hand, welcomed Mr Peter Obi to Anambra as a prominent son of the state and wished him well in his Presidential bid as the Presidential candidate of the Labour Party.”

After the meeting, Soludo, wrote on his verified Facebook Page, “Today after my engagement with the YESS family, I received in audience my brother and Presidential candidate of the Labour Party, Mr. Peter Obi, in a private meeting at the Governor’s lodge, Amawbia.

“Mr. Obi is one of the two illustrious Sons of our dear State gunning to be the President of Nigeria. The other is Justice Peter Umeadi of our great Party, the All Progressives Grand Alliance (APGA).

“As the Governor of these great Sons of the State, I am proud of this moment in history. And wish them the best of luck.”

The Presidential candidate of the Labour Party, Peter Obi, yesterday met with the Governor of Rivers, Nyesom Wike and other governors of the Peoples Democratic Party, PDP, in Rivers State.

The meeting is the second time Obi would meet with Wike after dumping the PDP and declaring his presidential ambition.

Mimiko disclosed that the meeting was held yesterday night.

Sharing a photograph of the meeting, Mimiko wrote: “Nice to share some time last night with @GovWike @Donald_Duke @PeterObi @HEDankwambo @GovSamuelOrtom @GovernorIkpeazu, Mohammed Adoke SAN and many other friends.”

As of the time of filing this report, the aim and location of the meeting is unknown.

Kizz Daniel was arrested for not showing up at his scheduled concert.

He was scheduled to perform at the Warehouse, Old Nextdoor Arena in Tanzania on Sunday but did not show up to the venue.

Disgruntled fans had taken to social media, expressing displeasure over the Singer’s failure to show up on Sunday.

Reports said the ‘Buga’ crooner refused to mount the stage because he allegedly forgot his travelling bag in Uganda and didn’t want to wear borrowed clothes.

However, the angry fans who reportedly paid $5000 for tables were seen hurling bottles at each other and destroying properties at the event centre.

A viral video of the arrest showed the singer wearing a hooded jacket and being led into a police vehicle.

This is the second time the singer has failed to perform at a fully booked concert while fans waited.

He had last month kept fans waiting for hours at his DMV concert in New York but later blamed his no-show on immigration challenges.