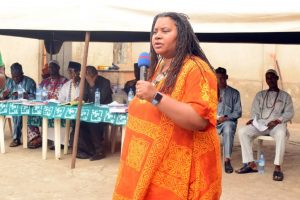 Chief Dr. Atim Eneida George
In commemoration of the Black and Women’s History Months, Dr. Atim Eneida George, a former Public Affairs Officer of the US Embassy in Nigeria, has engaged residents of Makoko community in Lagos to sensitize them on their voting rights and women empowerment.
The event, hosted by CEE-HOPE Nigeria, a nongovernmental organization (NGO) working with young people in marginalized communities, and sponsored by the United States of America’s Embassy in Nigeria, attracted several stakeholders from within the community and beyond.
Dr. Eneida George, the celebrated former diplomat of African-American descent and currently living in the USA, recalled the pre-civil rights era in the USA where African Americans were disenfranchised and marginalized from governance and general decision-taking processes in their own country.  According to her, even with the right to vote, the black population in the USA still faced a major huddle due to their then low literacy level. She therefore advised the younger generation present to take governance process.
“Democracy, governance and education are interwoven. To the young ones, your education is your key to anywhere you want to go,’ she said. ‘Regardless of your situation now, focus on your studies, regardless of the barriers, do not be discouraged, you can change the world and you can raise a wonderful institution like CEE-HOPE and make impact in the lives of several others. Especially to the girl child, education is essential because If you educate a boy, you educate an individual, when you educate a woman you educate a nation”, she added.
Dr. George who attracted several awards and recognition in the course of her long duty post in Nigeria including the traditional title of Yeye Araba of Ife, further reiterated that, “governance is too important to be left in the hands of a selected few. All and sundry should play effective roles in governance either by voting or by being voted for.’
Emmanuel Agunze, Founder, Makoko Dream School and a Nelson Mandela Washington Fellow, noted that one of the reasons for the decline in participation in governance at the grassroots levels is because of the challenges that are encountered during the voting process.
He noted that the process of securing voters’ card, poor facilities at voting centers and violence are some of the many reasons people, most especially women have been discouraged to vote.
A Community Leader, Mr. Agbodemu Ishola Musbau said so many Nigerians are responsible for voting wrong persons into power because they are rather satisfied to vote for persons who would induce them with money and food items than to vote for those who would serve genuinely.
The event attracted several local chiefs from across Makoko as well as women leaders, youth leaders pupils from the Diaspora School and the Makoko Dream School, both in Makoko.
One of the local chiefs, Chief Albert Ayide (aka Baale Jeje), thanked CEE-HOPE for the opportunity of the program which he described as very enlightening and asked for a repeat of such for more enlightenment. He however noted that despite the efforts of their community members to participate in governance by voting for people they believed were suitable, they are not getting the dividends of good governance.  He also pleaded for educational support, lending more support to the ongoing work of CEE-HOPE in Makoko, in addition to programs that would empower women.
Other chiefs present include Alase Agoyon Francis, Baale Shemede Emmanuel, Baale Panke Victor, Oluwo of Makoko Olaiya, Aji Steven and the immediate host, Chief Adewale Akintimehin (aka Alfa). There were also officials from the USA Embassy in Lagos.
Earlier in his opening remarks, a Board of Trustees member of CEE-HOPE Nigeria and veteran journalist, Lekan Otufodunrin appreciated the guest speaker for choosing CEE-HOPE and Makoko as beneficiaries of the event which he described as highly empowering to the participants.
Related Topics:
Up Next