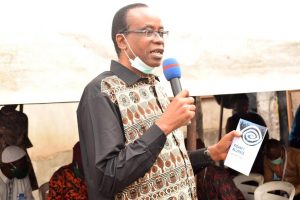 Bassey, director of the Health of Mother Earth Foundation (HOMEF) and a 2010 recipient of the Right Livelihoods Awards (aka the Alternative Nobel Price), engaged young people at the community office of the NGO, Centre for Children’s Health Education, Orientation and Orientation (CEE-HOPE). ‘This point in your life is when you begin to put up the building blocks of your entire life and career,’ he told the children. ‘The efforts you put into your education now, into ICT training just as you are currently involved, will determine what you become in future. The computer skills for instance is one that you will need for the rest of your life, so you must remain focused’, he added. He further encouraged them to look beyond their poor and marginalised community and fix their attention on greater future.

Also, Bassey, a trained architect and writer, commissioned a locally fabricated handwash machine provided by CEE-HOPE for children training at the community centre and the community in general to help improve sanitation (especially handwashing) practice in light of the COVID-19 pandemic’s challenge. ‘For us to beat this global pandemic, constant handwashing is very critical and so you have to consciously imbibe the habit’, said Bassey.

The handwashing machine, made by Jos, Plateau State-based Bennie Agro Limited, is fabricated in such a way that only the leg is used to pump out water and liquid soap in the process thus minimising the possibility of hand contamination.

CEE-HOPE’s executive director, Betty Abah, commended Bassey for what she described as leading activist’s consistently supportive presence. ‘We are extremely grateful for the support of Dr. Bassey over the years. This commissioning, amidst his busy schedules and visit for the Fishnet Alliance meeting, shows his commitment to seeing to the success of our work with young marginalised populations in Makoko and other places.’ That was his sixth visit to Makoko, Abah said. She added that the machine was a pilot project starting with Makoko, whose successful use would spur the group to provide for other marginalised communities where CEE-HOPE also works.

Titilope Ajimuda, a Makoko youth and the coordinator of the CEE-HOPE ICT and community youth engagement centre, spoke in similar veins. ‘His presence and talk with the children was very encouraging. He spoke on the need for personal hygiene and especially the need for us to face our education. It was a great privilege to listen to him’, she said.

Earlier, the chairman of Friends of the Earth International group, held a meeting with fishermen and women drawn from Makoko and other areas around Lagos under the umbrella of the Fishnet Alliance, a network of fishers engaged in and promoting sustainable fishing and protecting the interest of fisher folks, with members from across several African countries. Besides discussing with the members on pertinent issues and promising them support, Bassey also gave out several food items courtesy of Fishnet in collaboration with HOMEF. The distribution attracted fishermen, fish processors and traders who all left with food items as a palliative to help them cope with the impact of COVIDF-19 and the several challenges they face.

The palliative, according to Bassey, was crucial because fishermen are among those worst hit by the COVID-19 lockdown.

“The pandemic has ripped off the cover from healthcare delivery systems that had hitherto been hidden since citizens that could afford the bills could easily jet out of the country to nurse their headaches while the poor died on the doorsteps of health centres that are ill equipped to deliver needed services. With lockdown and other restrictions, the impact has been disproportionately felt by the poor, women and social classes with no support systems. One of such exposed and under-supported social group is that of artisanal fishers, fish processors and marketers. Routinely ignored in the scheme of things, the lockdown measures has thrown 6.5 million strong fishers into abject stress,” he said in his statement.

He explained that the food item was just a phase of the intervention the fishermen would be receiving.

“We are having conversation with them about how to assist some of them structurally, in terms of helping some of them have shipping gears because to teach a man to fish is a lot better than giving them food,” he said.

A Makoko community leader, Chief Akintimehin Claudius Adewale, said the high activities of sand mining (dredging) going on in the area and has severely impacted on the livelihoods of the community people. He called on the government to support fishers by rolling out policies that protect the aquatic environment, clean-up already polluted areas and guarantee the rights of the people to a decent livelihood.

Another community leader, Chief Ayinde Albert (aka Baale Jeje), expressed gratitude for the palliative given to them. He said the gesture makes them proud of their fishing trade as it is their sole source of income which they use in the education of their children.

One of the about 100 recipients of the palliatives, Mrs Janet Kpenje, said the food stuff she had received would go a long way in her home.