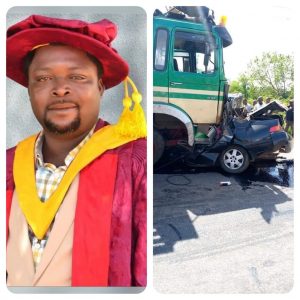 Mr. Levite was crushed to his early demise Saturday afternoon at Gbatse along Ugbema-Adikpo road in Ushongo Local Government of Benue State when a truck on a high speed, trying to avoid police checks, rammed unto the stationary Toyota car belonging to Mr. Levite killing all occupants of the car including Mr. Levite.

Until the unfortunate incident, Mr. Levite was lecture and head of Mass Communications department at the University of Mkar.

According to reports, the academic Don was only helping to convey his sick colleague, one Mr. Moses Tarnongo and his wife and children to the hospital for his occasional treatment, a gesture Mr. Levite volunteered to do for a friend and colleague.

In a statement posted on the WhatsApp group of BSU MACOSITE’06, the Chairman and General coordinator of the group, Comrade Ochonu Emmanuel Ochonu said  “This is a sad day for all of us.😭😭😭😭😭”

Mr. Jude Ahure, Coordinator of the Makurdi Chapter describes Mr. Levite as a dear friend who was full of life and impact.

“My dear friend Levite! Rest on my friend! A life full of impact indeed! We will miss you my friend! You came! You saw!! You conquered!!! Rest on dear friend! Rest on in the bosom of our Lord and saviour Jesus Christ!!!”

Another old course mate of Levite and journalist based in Abuja, Mr. Tortiv Emmanuel posted: “I am short of words on the sudden tragic end of our dear course mate and friend Joshua Leva. I condole most of all with the Leadership of our Great Alumni, MACOSITE Set ’06 led by Comrade Emmanuel OCHONU, his Executive and the general Group. I also condole with our Abuja Chapter Coordinator, Mr. Caleb Nor and all our Kapital Chapter Colleagues. As we await updates on the next line of action, I ask God to give his wife and all the families the fortitude to bear the tragic loss. Rest in Peace Leva and all the others. Amen.”

Mr. Caleb Nor, coordinator of the Abuja chapter of BSU MACOSITE’06 who is also a journalist based in Abuja was first to break the sad news to the group on Sunday morning. “Good morning dear mates. I woke up earlier this morning to be greeted with this (pictures from scene of accident). Please can people close around give us a confirmation? Am still in a devasted mood.”

Mr. Nor who spoke with Inside Benue described the incident as heart wrenching and still unbelievable. “Mr. Levite hosted me at his place earlier this year,” he said.

Mr. Nor and some. Members of the group would be paying a visit to the bereaved family on behalf of the group on Monday.

Mr. Agi Joseph, who is also a member of the group and journalist with FRCN, Abuja describes the unfortunate situation as painful: “Aah! Painful, painful and painful indeed! The word of God describes this life as a ‘mist’ and ‘shadow;’ and that is the truth.

“I met Levite at  NSUK PG School, Keffi early January this year and we stood talking for a while… And now, this precious soul is gone.”

The bodies of Mr. Levite and the other victims have been deposited at Ostra Gum Hospital, Ushongo in line with directives from the Ushongo Local Government Chairman, Mr. Asawa Joseph who hasted to the scene of the accident from Makurdi upon hearing the sad news.

Mr. Nor Caleb and other old course mates of Levite promise to keep the group updated on any developments regarding the burial as they relate with the family of the deceased.