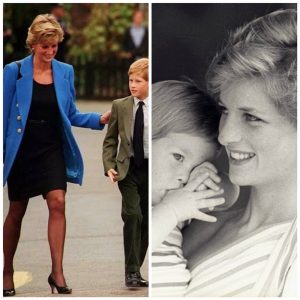 Some people’s quest for freedom is inborn. Put them in a cage made of gold, garnish them with the choicest of royalty, they will break free someday and find expression.

This is what we find running in the blood stream of Prince Harry in this Harry-Meghan story.

In 1980, 19-year-old Diana Spencer said ‘yes I do’ to the charming Prince Charles and got married into the British Royal Family. But the day she moved into the the Royal Family house,  her newly-acquired personal policeman said to her:
“This is the last night of your freedom, ever, in the rest of your life. So make the most of it”.

Those words preempted her shackled life in the Royal Family. A day before her wedding, she told her sister “I can’t do this.” As she walked out of the royal carriage on her wedding day, she felt like a lamb to the slaughter.

Not too long after they tied the marital knot, Prince Charles allegedly began to cheat on her with her own sister Camella. Devastated, Princess Diana was drown in depression and several times attempted suicide when she cut her wrist and even threw herself on the floor when she was pregnant.

With so much incompatibilities, the marriage hit the rock when both Charles and Diana went their separate ways in 1992.
The British press took side with Charles and called Diana all sorts of names but she was undaunted in her quest for love and freedom. She began to travel round the world touching lives through charity. Though she found the freedom she craved, her life was hunted.

Princess Diana knew her life was in the line as she began to fear been assassinated. In a letter dated October 1996 and written to Burrell, “This phase in my life is the most dangerous. They are planning an accident in my car.”

The sad day broke on August 31, 1997. Princess Diana was involved in a ghastly auto crash when on vacation with her new lover, Dodi son of multi billionaire owner of Harrods, Mohammed al Fayed, in Paris.

And the statement made by the Queen on hearing the news of the accident and Diana’s death was suspicious. Her first comment, upon being told of Diana’s death, was to say: ‘Someone must have greased the brakes,’

Diana’s younger son Harry has since grown into a man and seems to have the same instinct in him, -the quest for freedom. Blood, they say, is ticker than water. Meghan has only made that dream come true. We don’t know how long their union will last but we are certain one something; Harry has found his freedom. And we pray the freedom lasts.

Not to long ago,  Prince Harry said the “ruthless campaign“ against the Duchess of Sussex is “history repeating itself”.
“I lost my mother and now I watch my wife falling victim to the same powerful forces.”

This is the only way Harry could avenge his mother’s death.
Shalom.

Cristiano Ronaldo is close to agreeing on a mega transfer to Saudi Arabian outfit All-Nassr.

In a report published by Spanish publication Marca, Ronaldo has been offered a two-year contract by Al-Nassr, who are able to sign the 37-year-old on a free transfer following his departure from Manchester United.

CR7 left United by mutual consent this month
Available on a free transfer.

Marca reports that Ronaldo has also attracted interest from MLS, but he is very conscious of picking up the most lucrative wage possible if calling time on his illustrious career in Europe.

Al-Nassr are willing to pay the Portugal forward a grand total of €400 million if he agrees on a deal to play for the Saudi Arabian club until 2025.

Ronaldo’s second spell at Old Trafford came to an acrimonious end earlier this month as United announced the termination of his contract by mutual consent. The decision was made following the five-time Ballon d’Or winner’s controversial interview with Piers Morgan, during which he accused the club of betraying him and admitted to having no respect for head coach Erik ten Hag

Should Ronaldo indeed end up joining Al-Nassr, he will link up with another former Premier League star in David Ospina, who played in goal for Arsenal between 2014 and 2019.

The striker is currently starring for Portugal at the 2022 World Cup, and will hope for another start when Fernando Santos’ side wrap up their group stage campaign against South Korea on Friday.

Controversial Islamic cleric, Sheikh Ahmed Gumi has revealed what would make him vote for the Labour Party, LP, presidential candidate, Peter Obi in 2023.Gumi assured Obi of his vote if he can restructure Nigeria if elected president in 2023.

He spoke in Kaduna yesterday while playing host to the former Anambra State governor and his running mate, Datti Baba-Ahmed.Obi and his running mate were in Kaduna to attend an interactive session for presidential candidates organised by a joint committee of Arewa groups in the build up to the 2023 general elections. However, Gumi commended Obi for visiting and briefing him about his plan for Nigeria.

According to Gumi: “As you come here (Kaduna) people will like to hear your views about restructuring Nigeria; Nigeria has been restructuring itself from independence to date. It was never static, but I want to know about views on restructuring so that I can write on my Facebook page `this is the presidential candidate who can do this for me; I will assure him of my vote’”. Gumi also asked the LP presidential candidate how he intends to address the issues of agitations and poverty in the country.

The presidential candidate of the Labour Party in the 2023 general election, Peter Obi, has paid the Anambra State Governor, Chukwuma Soludo, a courtesy visit at the Governor’s Lodge, Amawbia.

Soludo and Obi met behind closed-doors after which Obi lauded Soludo for the “great job he is doing in Anambra State.” This is contained in a statement posted to the Facebook Page of Soludo TV on Friday. The statement, which is titled, ‘Soludo receives Peter Obi on a courtesy visit’, read: “Governor Chukwuma Charles Soludo, CFR, received earlier today, Mr Peter Obi, former Governor of Anambra State and Presidential candidate of the Labour Party at the Governor’s Lodge, Amawbia.

“Both leaders had a mutual discussion behind closed doors. Afterwards, Mr Peter Obi commended Governor Soludo highly for the great job he is doing in Anambra State. Governor Soludo, on the other hand, welcomed Mr Peter Obi to Anambra as a prominent son of the state and wished him well in his Presidential bid as the Presidential candidate of the Labour Party.”

After the meeting, Soludo, wrote on his verified Facebook Page, “Today after my engagement with the YESS family, I received in audience my brother and Presidential candidate of the Labour Party, Mr. Peter Obi, in a private meeting at the Governor’s lodge, Amawbia.

“Mr. Obi is one of the two illustrious Sons of our dear State gunning to be the President of Nigeria. The other is Justice Peter Umeadi of our great Party, the All Progressives Grand Alliance (APGA).

“As the Governor of these great Sons of the State, I am proud of this moment in history. And wish them the best of luck.”