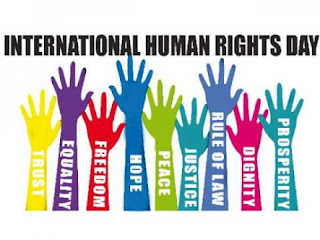 As the world observe the Human Rights Day today, Non-Governmental Organisations (NGOs)otherwise known as Non Profit Organisations (NPOs) and the international bodies have called for true human freedom as exemplified in the Universal Declaration of Human Rights.

Victoria Ibezim-Ohaeri, Executive Director of Space for Change, an NPO based in Lagos through a seminar it organized in commemoration of the Day told Journalists and other stakeholders that the organisation was indeed delighted to join the rest of the world in commemorating the International Human Rights Day.
”While the anniversary provides an opportunity for us to celebrate the beautiful declaration that assures all human of their inalienable entitlements to basic economic, social, cultural and political rights, we must also amidst this celebration reflect as a nation, the quality of our commitment to protect human rights and scale up where gaps exist.”
Ibezim-Ohaeri nonetheless pointed to worrying cases of deterioration of human rights of citizens in Nigeria as manifested in the alarming number of targeted attacks on dissenting voices, human rights defenders, protesters, journalists, and activists.

”Although our present realities threaten to dampen the spirit of Today’s celebration, we nevertheless are consoled that we will always continue to triumph over any form of repression even as we enjoin all Nigerians to remain steadfast in the course of championing the non-negotiabale and individual indivisible rights of all humans. Once again, we stand in solidarity with all human rights defenders around the world speaking their truth in various indigenous language to celebrate the significance of today,” she said.
International Human Rights Day is observed every year on 10 December — the day the United Nations General Assembly adopted, in 1948, the Universal Declaration of Human Rights  (UDHR): a milestone document proclaiming the inalienable rights which everyone is inherently entitled to as a human being regardless of race, colour, religion, sex, language, political or other opinion, national or social origin, property, birth or other status.
According to the United Nations, the Declaration is drafted by representatives of diverse legal and cultural backgrounds from all regions of the world, and sets out universal values and a common standard of achievement for all peoples and all nations. It establishes the equal dignity and worth of every person. Thanks to the Declaration, and States’ commitments to its principles, the dignity of millions has been uplifted and the foundation for a more just world has been laid. While its promise is yet to be fully realized, the very fact that it has stood the test of time is testament to the enduring universality of its perennial values of equality, justice and human dignity.